And here is the sci-fi short with the quality of a long Hollywood feature we promised you few months ago. It’s legal, it’s a bit weird, it’s Ethan Shaftel’s Flesh Computer.

In a post-apocalyptic America obliterated by an economical breakdown, a nerdy janitor is building a computer half made of flesh. His experience on artificial intelligence takes a leap forward when the natural dumbness of man gets on the way. A few years ago we had a long chat with director Ethan Shaftel for Suspension, his long indie feature he co-directed, before meeting him at ECU (European film festival) last year in Paris where he presented this short. Flesh Computer deals with a classical science-fiction thema but adds a unique feature. All along the story, the australian philosopher David Chalmers discusses some of the ideas he developped during 30 years of research and lead to the inevitable climax for both man and machine. Flesh Computer is a metaphysical-geek approach of the question of self-consciousness. It even has a cat in its cast who gives two of three of the best performances in the movie. The climax references all the influences that got trapped in Shaftel’s mind : here comes Cronenberg, William Gibson, and even Shinya Tsukamoto‘s Tetsuo and even Chalmers’ thesis the most unknown philosopher in the « Shore » (France, as it should be named  in hobbit terms despite many of french intellectuals dream that their country is still shining with the light of Descartes, b who once said « I think, therefore I am » but it doesn’t think anymore so it is not). So we spent a small time with Chalmers, the time of a TED conference you can watch just below, to try to understand his theories.

Chalmer’s thinking is as complex as Flesh Computer is easy to understand. Essentially because Chalmer deals with a subject that only the origin of the Universe can compete with in its complexity : the nature of consciousness. He says that existence is like « a movie playing inside your head (…), a multi-track movie » with « 3D vision and surround sound, (…) smell and taste and touch, (…) a sense of your body, pain, hunger, orgasms, emotions, anger and happiness. (…) And it has this constant voiceover narrative« . Consciousness is a kind of anomaly regarding to the history of the Universe but is in the same time a part of its continuity. And like the laws that built this universe as established by Newton, Einstein and all their megamind-buddies, conscioussness should be considered as a fundamental force, an elementary brick. Like gravity and electro-magnetism. Chalmers use philosophy and prospective science, the only tools currently available now, to explore the mystery of consciousness. Without consciousness, we would be no more but robots processing inputs and outputs of datas and « life would have no meaning, no value« . Meaning, value and morals, that is exactly what the antagonists (the evil characters) lack in Shaftel’s short. The test of the mirror, created by the american psychologist Norman Gallup, tends to prove that the human beeing reachs self-conscioussness around the age of 18 (months…). Our ego-centric specy must have not been very pleased when, according to the same test, some primates, dolphins, elephants, some birds and even pigs (upper-class pigs probably), were granted of self-awareness. Anyway, none of these so called animals is capable of the deliberate cruelty that we, human, are authors and/or responsible of. This is what Flesh Computer achieves to illustrate : the absolute evil that inhabits some of our fellow human companions and lurks potentially inside all of us. An evil that won’t be so easily tolerated by these future hypothetic machines-flesh.

Disclaimer : one or two scenes may hurt the sensibility of the human viewers. 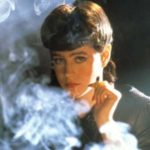